It's got awe-inspiring historical landmarks, a colonial district overflowing with Spanish architecture, and a bar scene that lasts into the wee hours of the night. But San Juan, Puerto Rico also has a surplus of beaches right within its territory. And these eye-catching stretches are so clean and well-maintained they put other city beaches to shame.

The best part? U.S. citizens don't need a passport to visit Puerto Rico, making a jaunt down to this Caribbean island even easier.

Here are our picks for the best beaches in San Juan, Puerto Rico: Forget about booking an expensive snorkeling trip. At Escambrón Beach, all you need is a swimsuit and a snorkel mask to glimpse a variety of tropical fish at the coral reefs right offshore.

The beachfront at Escambrón is not huge, but there's plenty of space for gatherings under the palm trees, and this Blue Flag beach boasts high water quality, lifeguards, bathrooms and parking (for a small fee). You'll be most impressed by the clarity of the water, which is shallow enough that you can wander out to get a better look at the rocky island off in the distance. This tiny but pristine gem is just a sliver of sand near the Condado Plaza Hilton and the Condado Lagoon. But in the early afternoons, the sun's rays make the tranquil water completely transparent, and a snorkel mask will help you see the tiny seashells comprising the ocean floor, plus the occasional curious fish swimming near your ankles. There is no parking and no bathrooms, so plan accordingly. 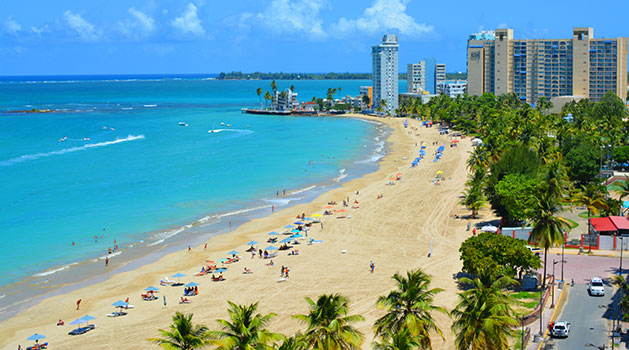 Isla Verde Beach is one of the city's most relaxing, yet there's plenty of nightlife nearby. Photo: Theresa Boehl

Though it's technically located in the town of Carolina, Isla Verde is still lumped in with the best beaches in San Juan. Its breathtaking blue waters and wide, crescent-shaped beachfront make it a favorite of tourists staying at one of the many stylish high-rise hotels in the area.

A relaxing, island-style vibe prevails here, but come nightfall, visitors reenergize in trendy bars like the rooftop Mist at the San Juan Water and Beach Club, or at epic dance clubs like Brava. Carolina Beach is just a bit east of San Juan, near the airport. Photo: Theresa Boehl

Just east of Isla Verde is Carolina Beach, a peaceful, natural beach escape that offers parking, bathrooms and lifeguards. The waves are a bit stronger out this way, but the warm water is wonderful for a dip nonetheless.

The most intriguing aspect of this beach? It's home to the Coastal Forest Nature Reserve, a campsite of protestors occupying a small wooded area, where wildlife live alongside rebellious citizens dedicated to keeping the coastal area out of the hands of developers. Condado Beach is in the heart of the tourist district, surrounded by hotels and restaurants. Photo: Theresa Boehl

Condado Beach is often regarded as one of the best beaches in San Juan, mostly for its proximity to Old San Juan, Santurce and the Condado neighborhood itself, which nearly guarantees that tourists will make a stop through here. It's a golden-sand stretch backed by popular hotels and casinos, with lively Ashford Avenue just a stone's throw away.

Parque La Ventana al Mar, a palm-lined green space with an impressive water fountain, adds to the upscale vibe. A walk along the small oceanfront promenade here is a must, but beware of crashing waves while you take selfies. It's surprising that more visitors don't make the time for Ocean Park Beach, a nightly meeting point for expats, locals, water sports enthusiasts and dog lovers. The surrounding neighborhood of Ocean Park, home to Loiza Street's many hipster eateries and nightclubs, is a mix of grit and trendiness, bringing neighborhoods like Brooklyn or Chicago's Logan Square to mind.

Once the sun sets on Ocean Park Beach, the kite-surfers pack up for the day, but the serious partiers stay for some late-night oceanfront dancing and drinking. Playa Peña is a hidden beach across from the Capitolio in Old San Juan. Photo: Theresa Boehl

It's the only beach in Old San Juan, but it's so easy to miss that most tourists never include it in their itineraries. Take a break from the old colonial town's cobblestone streets and shady plazas and walk toward the Capitolio, just east of the San Cristóbal fort.

A small plaza gives access to a stairway down to this rugged coastal haven, perfect for a few minutes of tranquility and salty breezes. Most days, the waves are too strong for swimming, and there are no lifeguards or bathrooms, so come prepared and be vigilant. Playa de Piñones offers not only a fantastic beach for swimming, but many chances to taste local fare too. Photo: Theresa Boehl

In all fairness, Playa de Piñones is located well outside the city boundaries near the neighboring town of Loiza, but it's so legendary among beach-lovers and locals that to leave it off a list of the best beaches in San Juan would be a mistake.

Why is it so beloved? For one, its cove beach offers calm, clear waters to cool swimmers on even the hottest days. Plus, there are the many ramshackle eateries where you can sample local fried specialties like alcapurrias (yautia fritters), piononos (stuffed plantains) or pastelitos (Puerto Rican-style empanadas), washed down with an ice-cold coconut water or a can of Medalla.

Interested in seeing the best beaches in San Juan, Puerto Rico for yourself? Browse our Puerto Rico deals or sign up for our email to get our deals delivered to your inbox.